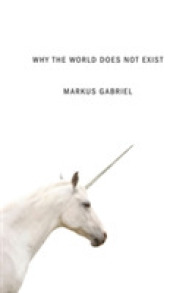 Why the World Does Not Exist

New in paperback. Hardcover was published in 2015. This new book of popular philosophy is a major bestseller in Germany, where it sold over 40,000 copies in the first few weeks after publication. Markus Gabriel argues that the world does not exist because what is, in fact, includes not simply so-called facts, but also views of those facts, dreams, projects, works of art and perspectives. He describes this idea as New Realism - the name for the age after the postmodern.